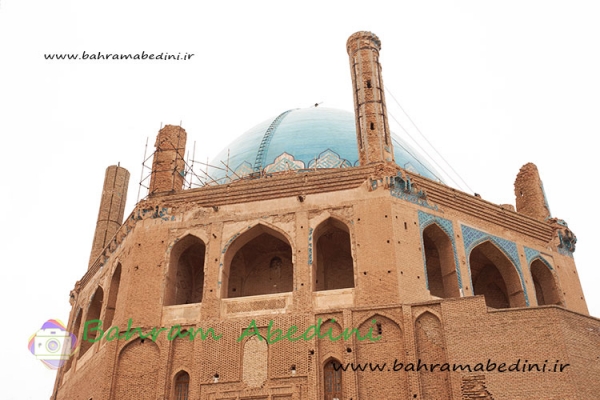 As the ancient capital of the Ilkhanid dynasty, Soltaniyeh represents an exceptional testimony to the history of the 13th and 14th centuries. The Mausoleum of Oljaytu forms an essential link in the development of Islamic architecture in central and western Asia, from the classical Seljuk phase until the Timurid period. This is particularly relevant to the double-shell structure and the elaborate use of materials and themes in the decoration. It is outstanding by virtue of its innovative engineering structure, spatial proportions, architectural forms and the decorative patterns and techniques

Soltaniyeh is located some 240 km from Tehran in north-western Iran. There is archaeological evidence that the site had been occupied at least from the 1st millennium BC. The construction of the settlement was only started by the Ilkhanid dynasty, around 1290. The fourth Mongol ruler in Persia, Arqun Khan, decided to build a summer residence in this region, because it offered good hunting grounds and rich pastures for horse breeding. His son, Qazan Khan, had a mausoleum built over his tomb, now known as Tappeh Nur. There is little information about the beginnings of the new settlement until Oljaytu (later Sultan Muhammad Khodabandeh) came in to power in 1304 when he decided to enlarge the city and make it his capital, naming it Soltaniyeh (Imperial). Together with Tabriz, Soltaniyeh became a major trading centre on the route between Asia and Europe. In the 16th and 17th centuries, Soltaniyeh gradually declined and remained in ruins. Only a rural village was built over the remains.

The Mausoleum of Oljaytu, the principal monument of the city, constructed in 1302-12, stands in the middle of a rural settlement, surrounded by fertile meadows. The building is octagonal in form, rising to a stunning high-profile dome, covered with turquoise-blue faience tiles. This structure represents the earliest existing example of the double dome in Iran. The dome has no buttresses nor any additional thickness, and it is surrounded by eight slender minarets as a decorative feature. A wide band of square Kufic around the drum makes a transition between the light blue and the lapis lazuli blue of the main stalactite cornice. The second-storey galleries of the mausoleum open outwards, anticipating buildings such as the. Taj Mahal. Structurally the building is considered a masterpiece. The interior walls were originally faced with light golden-toned bricks and dark blue faience tiles to form large inscriptions in Kufic. However, in 1313, it was redecorated with plaster, using a rich variety of fine ornaments, often worked in low relief. The second phase of the decoration belongs to the period when the use of the monument as a Shi'a shrine was given up. The decoration of the exterior belongs to the first phase.

The immediate surroundings of the mausoleum consist of a stone terrace in the form of a citadel (Arg). Originally, the citadel was surrounded by a 30 m wide moat. Today this is an archaeological site.

Other monuments and sites in the World Heritage site include the Old City of Soltaniyeh, founded as the capital of Oljaytu in succession to Tabriz; the Mausoleum of Sultan Chelebi Oghlu, a brick structure from the 1330s with an octagonal tower; The Mausoleum of Mullah Hassan Kashi, a religious figure and poet at the court of Oljaytu; and the remains of Ghazan's tomb at Tappeh Nur, which, together with its adjacent remains known as the Tappeh Nur Kuchak, form an archaeological monument.

In historic texts the area of Soltaniyeh was called the 'Prairie of the Alezans' or the 'Falcon's Hunting Ground'. The special nature of these meadows is due to the soil, which prevents the entire absorption of rain water. As a result, it was especially fertile pasture, particularly appropriate for horse breeding. This was also one of the reasons for the establishment of the city in this location.

More in this category: « Saint Stepanos Monastery
back to top
load more hold SHIFT key to load all load all
X