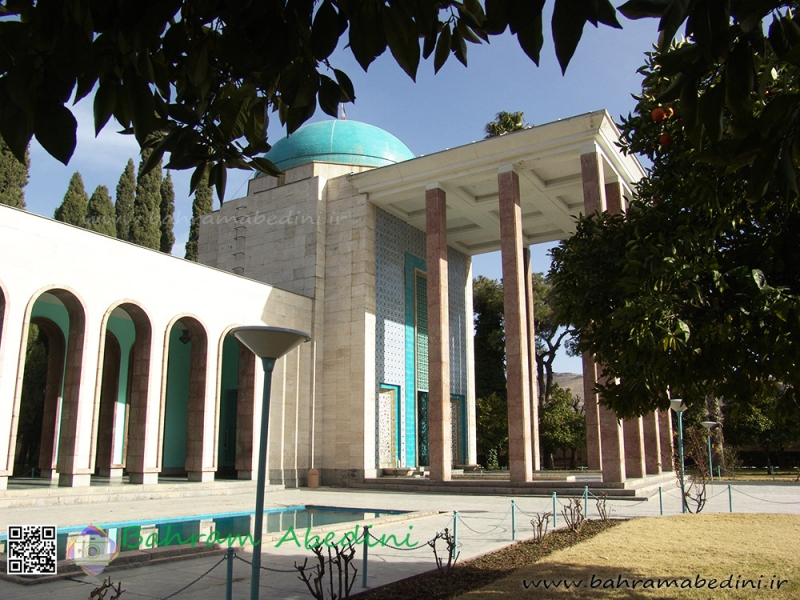 More importantly, Shiraz is the hub for visiting some of the most famous highlights of pre-Islamic Persia, namely Persepolis, the world renowned ceremonial capital of the Persians; Naghsh-e-Rostam (the Necropolis) and Naghsh-e-Rajab; Pasragad, the first capital of the Persian Empire; and the interesting remains of 3rd c. AD cities of Firuzabad and Bishapur.Shiraz is located in the south of Iran and the northwest of Fars Province. It is built in a green plain at the foot of the Zagros Mountains 1540 meters (5300 ft) above sea level. Shiraz is 919 kilometers (571 miles) south of Tehran. A seasonal river, Rudkhaneye Khoshk, flows through the northern part of the city and on into Maharloo lake.Shiraz has a moderate climate with regular seasons. The precipitation in recent years. During which atmospheric conditions have changed perceptibly, has been comparatively sufficient, and has reached 23 inches annually, with the average ranging between 14 and 18 inches.Historically, the city enjoys a long continual existence. A legend attributes the founding of the city to Tahmoures, the Demon-Binder; however, the earliest reference to the city, Tirazis^, as it was known then, comes from Elamite clay tablets dating to 2000 BC found in June of 1970, in SW corner of the city. The tablets were written in ancient Elamite cuneiform.Further revelation came with the discovery of more tablets, this time from Persepolis attesting to some workers being from Shiraz. The city didn’t cease to exist with the fall of the First Persian Empire. It became the provincial capital of Fars or Persia Province in 693 A.D, after the Arab invaders conquered Estakhr, the ancestral home and first capital of the Sassanians and a principal city of Persia at the time. As Estakhr fell into decline, Shiraz grew in importance. The eldest of the three brothers who founded the Buyid Dynasty, Ali Emad Al-Dowleh (934-949), chosen Shiraz as his capital under whose rule Shiraz flourished. It was also ruled by Saljuq and Kharazmid dynasties before the Mongol conquest. The city was spared destruction by the invading Mongols, when its local ruler offered tributes and submission to Genghis Khan. Shiraz was again spared by Tamerlane. When in 1382 the local monarch, Shah Shoja agreed to submit to the invader. In the 13th century, Shiraz became a leading center of the arts and letters, thanks to the encouragement of its ruler and the presence of many Persian scholars and artists. For this reason, the city was named by classical geographers Dar al-‘Elm, the House of Knowledge. Among the important Persian poets, mystics and philosophers born in Shiraz were the poets Sa’adi and Hafez, the mystic Roozbehan, and the philosopher Mulla Sadra.The Age of the political glory of Shiraz came with the Zand Dynasty who made Shiraz their National capital from 1762-1781. Karim Khan Zand followed the example of Shah Abbas I and laid down new avenues and buildings and beautified the city to become a close rival to Esfahan. Following the disastrous fate of the Zand Dynasty and the taking power of the Qajars in the North and the shifting of the capital to Tehran, the decline of Shiraz began. The city’s role in trade greatly diminished with the opening of the Trans-Persian railway in the 1930s, as trade routes shifted to the ports in Khuzestan.Against all odds, Shiraz continued to be the spiritual and literary heart of Persia, which can be felt in its bazaars and streets and at the tombs of its celebrated poets and mystics.

More in this category: « Esfahan- The Pearl of Persia (Part II) Persian Architecture »
back to top
load more hold SHIFT key to load all load all
X